Father Nathan attended Catholic School since he was a child. He attended high school at Saint Joseph's Higher Secondary School in Cuddalore, India. During that time, he joined the seminary to study for the priesthood for the Archdiocese of Pondicherry and Cuddalore. He studied at Saint Britto’s College in Madurai and received his Master of Arts degree. He continued his studies in Bangalore and obtained his Bachelor's in Philosophy and Master of Divinity Degree. He was ordained a priest on July 7, 1982 and was assigned to choir master and parochial vicar at Immaculate Conception Cathedral in Pondicherry, India.

While still in India, Father Nathan served 18 years in the Archdiocese of Pondicherry and Cuddalore in various positions. He was a pastor, principal, manager, secretary, and organized various programs for youth and children. Father Nathan was invited and incarnated to the United States to work at the hospital of the cathedral health care system for seven years and various towns in New Jersey. Since then, he has been a citizen of the United States for 16 years.

During that time Father Nathan went to New York and undertook studies to become a clinical chaplain at The College of Pastoral Supervision In New York. After he became a pastoral counselor and pastoral supervisor. He served in various parishes as parochial vicar in Orange, Newark, Roseland and Montclair, New Jersey.

Since 2013 Father Nathan has been serving as a pastor of Saints Joseph and Michael Church in Union City, New Jersey, one of the largest Hispanic parishes of the Archdiocese of Newark and as a teacher at the schools.

Father Nathan’s talents are singing, writing, teaching, and organizing to name a few. He can speak 10 different languages including English, Spanish, and Tamil.

In 2021 Mayor Brian stack appointed Father Nathan as a board member of the Board of Education in Union City and is honored and to continue to serve the Holy Catholic Church, the State of New Jersey, and the city of Union City. 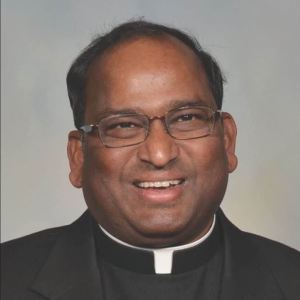